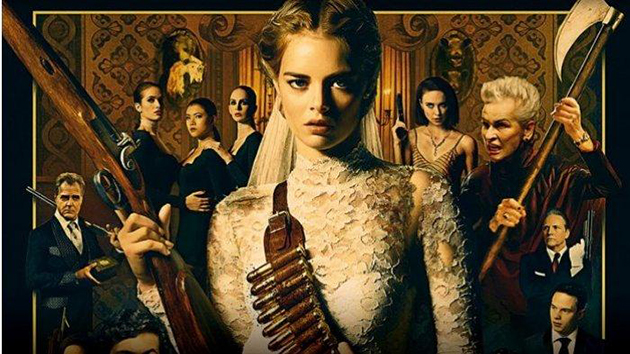 To call Ready or Not “high concept” would be putting it lightly. When reading back the above summary, I questioned myself as to whether it accurately summarised the film, only to find it needs little more than that single sentence. To some people at first glance, this synopsis would plummet the film immediately into ludicrous twaddle, a contrived attempt to squeeze another horror concept from a well-trodden genre. And yet it works entirely in the film’s favour when you give it the chance it so thoroughly deserves. From this absurd yet simple concept, the filmmakers behind Ready or Not are able to build upon its foundation with layers as rich as the house it is set in. A thoroughly entertaining shot of adrenaline, Ready or Not is one of my favourite films of the year, even if there’s one aspect of it I am still struggling to grasp. More on that later, though.

With a giddy dramatic irony, the film wisely uses a cold-open that acknowledges the audience’s knowledge of the premise and allows us to sit in fraught anxiety as we wait for the butchery to begin. 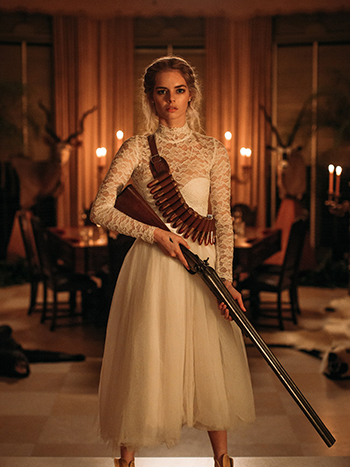 It’s an ingenious way to create an anchor point in its legitimately scary thrills while allowing the other layers – such as character, social commentary and tongue-in-cheek comedy – to build accordingly. The result is a film that consistently toys with your expectations; messing with the order of the standard horror movie beats in a way that thrusts the film forward with an unrelenting pace.

Yet, miraculously, it never loses sight of its larger ambitions. Unsatisfied with being a simple roller-coaster ride, Ready or Not is secured by a terrific script by screenwriters Guy Busick and Ryan Murphy, who lace their screenplay with insightful moments for the characters and their motivations. Oftentimes in high-concept films, the ridiculousness of the plot acts as a form of excuse for characters to behave at the mercy of its silliness, pawns in a game with no rules. Here, I was left smiling by the way in which Busick and Murphy give every single one of their characters legitimate motivations for the often bizarre things they do while still having fun with each of them, as if controlling a game of psychotic Cluedo. On top of this is a knowing – but never overbearing – acknowledgement of the recklessness of wealth and tradition, how it can so easily warp generations into thinking and feeling like the savage beasts that their opulence paints them as opposites to. It makes it all the more fascinating that one of the producers on this film is none other than Zodiac scribe James Vanderbilt of the famous New York Vanderbilt family, once the richest family in America. I am still wondering (and partly fearing) what personal input he had on this picture!

Thankfully, Ready or Not’s tight script is played perfectly by a marvellously game cast and pitch-perfect production design. Samara Weaving is undoubtedly a star-in-the-making with her wit, emotion and energy driving the film. Grace is a heroine that maintains her vulnerability, keeping the craziness grounded and never fraying into unbelievable revenge-power as many horror heroes can do.

As the film progresses, her fear and anger often manifest as animalistic grunts and screams, making her a force to be reckoned with without losing sight of the fact that she is still prey. Each of the family members also relish their roles and play them up wonderfully, particularly Henry Czerny and Andie MacDowell, but it’s the younger cast, namely the two brothers played by Mark O’Brien and Adam Brody, that give their characters a depth that contributes towards the commentary on generational manipulation. Credit must also go to the production team for their incredible set and costume design (watching Grace’s wedding dress turn from a pure white to blackened tatters is wonderful) and cinematographer Brett Jutkiewicz, whose amber-tinted colour palette, candle-lit lighting and use of vignette adds an old-world texture to the gory carnage.

It is unfortunate that I must now arrive at the aforementioned issue I have with Ready or Not. Much as I tack this on right at the end of a glowing review, the final 3 minutes of the film did not sit right with me. I genuinely cannot go in to details as to why due to heavy spoilers, but I am still wrestling with whether I liked how this film ends or not. I am leaning more towards a general distaste towards it, and it’s a crying shame, because the undeniable cult hit was playing out before me right up until its final moments left me feeling sour. I can absolutely see it being a crowd-pleaser for many, but for me it took an easy route to maintain shock, rather than the legitimate path to catharsis that is, in my opinion, so clearly laid out by the rest of the film. Perhaps this quarrel will heal with time, however, because as it stands, Ready or Not is a gripping thriller/horror/comedy blend that I cannot wait to watch again, and I guarantee it will be the best time you will spend with the in-laws this coming holiday season.