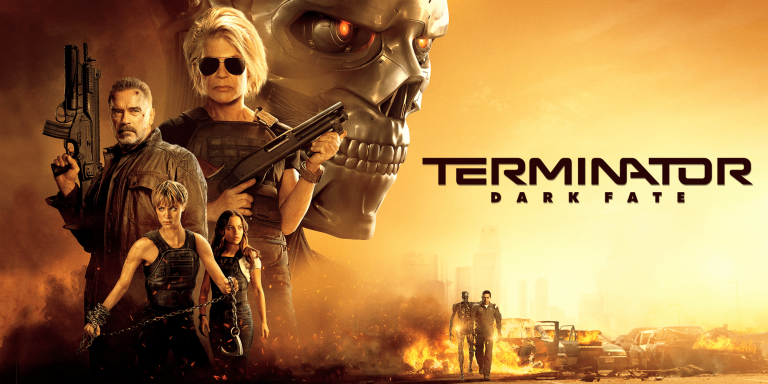 The machines that caught the imagination of the world in the 80s and 90s are back – they said they would be – from the future for another adventure in the present, so fasten your seatbelts.

Terminator Dark Fate is set in direct succession to the events in Termintor 2, ignores the other sequels and readjusts the timeline once again. You’re thrown into the action straight away and like the machines it’s fast, furious and relentless. The cinematic spectacle is the movie’s strong point – the fights and chases are incredibly well choreographed and filmed, the special effects are more extravagant, and all in all it takes the viewer to dizzying new heights and darker new depths. The sound design matches the busy screenplay and clashing of heavy metal, artillery, motors and explosions throughout perfectly. If you want to see an expertly put together action movie you’re in the right place.

Schwarzenegger always brings a degree of self-awareness of his personal violence in his films, which makes him as entertaining and charming as ever to watch. His role in terminator films over the years has become increasingly comical and however thin that may wear, I doubt movie goers will ever tire of seeing him play the killer robot on the big screen.

He’s joined by another Terminator alumni, Linda Hamilton, reprising her role as Sarah Connor who is by now an experienced, bitter Terminator hunter. Her portrayal intelligently studies the strengths and flaws of her character. Generational differences are positioned between Connor and the movie’s young new heroes, Grace and Dani. Played by Macenzie Davis and Natalie Reyes, both are excellent in their postmodern takes on their character roles. As Grace, a protector from the future, Davis’ breathtakingly high-energy performance will make you feel like you’ve run a marathon from just watching her. Reyes plays Dani, whose journey of self-discovery as she has to deal with her world being turned upside down as the story unfolds, along with the new challenges Connor now faces, provides a strong emotional hinge.

The latest terminator to travel through time largely fits the bill of the original concept that the stalker from the future should be easily lost in a crowd – before James Cameron decided to hire Schwarzenegger for that role. Gabriel Luna plays the unstoppable machine with all the sadistic determination you should expect of an AI that decimates all that stand in it’s way. While he has some fantastical scenes that explore the possibilities of what surveillance technologies placed in the wrong hands could achieve, this terminator brings little that’s new to the table. 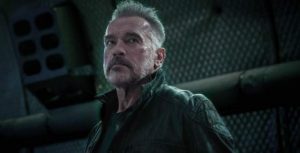 This is a problem the franchise has faced since the second film. How do you top the shape shifting liquid metal terminator? It seems impossible for terminator filmmakers to be so wildly imaginative and innovative with their villain. The conventional plot devices sequels often deploy that use bigger, faster and more advanced features than the previous film can be all too apparent, and this film is at times susceptible to these factors.

There are a lot of nice subtle tributes to the first two terminator films, one in particular being the use of musical themes from the previous films woven into the sound design as foley. Any Terminator fan will find these delightful. There are also a lot of new takes on ideas audiences have already seen in previous sequels, and there is very little new ground covered here. One would have hoped with James Cameron at the helm as executive producer, this would have injected more originality back into the series. We are now six Terminator films in, and the plot has gone from elaborate to ridiculous, although the pacing is excellent and there are some nice twists in the storyline.

The film has political and social current themes running though it that highlights subjects such as female empowerment, war, the uses of technology by authorities for control, and law and border security amongst others. This is also accompanied by a conscious diverse representation of groups.

I find whether this film deserves third place in the Terminator film hierarchy debatable, but Terminator Dark Fate certainly holds it’s own as a cinematic experience.