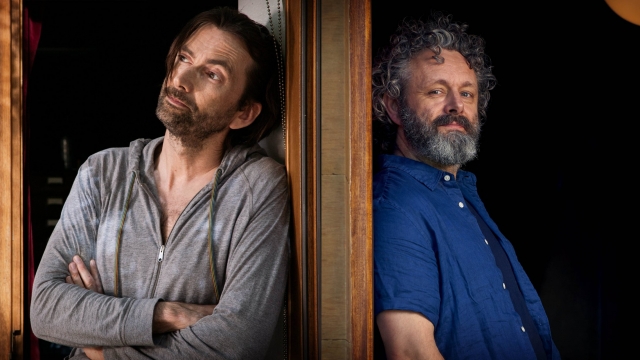 Michael Sheen and David Tennant (playing themselves) were due to star in a play that was cancelled because of the Covid-19 pandemic. Hoping to come out of lockdown ready to perform, their optimistic director Simon Evans (also playing himself) suggests that they rehearse the play via video chat. Unfortunately for Simon, the actors are distracted by family duties, frustrated with boredom and contending with each other’s inflated egos.

Joining the likes of Isolation Stories from ITV, BBC’s Staged is the latest show to present a slice of lockdown life, only this time with a self-aware wink and a nod towards the legions of actors and filmmakers who have had their careers put on hold. The concept of a lockdown drama is already bordering on cliché (not helped by the grating quantity of hastily produced, lockdown-inspired advertisements), but Staged manages to make it all feel unique and engaging again. If you’re getting sick of looking at video calls Staged won’t make for the best escapism, but it expertly utilises its quirky meta-plot and fantastic cast to deliver a charming, funny, thoroughly engaging mini-series, one that I wholeheartedly recommend to anyone.

Of course, the main draw here is its two leads – the affable pairing of David Tennant and Michael Sheen. Fans of their last show together, Good Omens, will immediately flock to this, with Staged offering what is (presumably) an exaggerated look into the actors’ real lives at the moment. The pair have an effortless chemistry together; it’s clear from their banter and mockery of each other that they’re good friends in real life, and this thin line between reality and fiction makes the core relationship in Staged work wonders. It’s often hard to tell if the pair are working off of a script, adlibbing or both, but that’s what makes their conversations so realistically done. They’re so natural that it helps cement Staged as a time-capsule for this weird lifestyle we’re all currently living. I also appreciated how the two aren’t afraid to depict ‘themselves’ in a negative light, as the plot hinges on the duo often succumbing to silly egotism or clumsy fibbing. It’s this willingness that allows the comedy to develop in their treatment of poor director Simon Evans (who directed Staged in reality), and also fleshes them out as ‘characters’ with both merits and flaws. The way that the pair are generally the cause of most rehearsal problems makes the finale of Staged immensely satisfying. The show features a selection of brilliant guest stars, and the one who pops in to give the two a virtual slap on the wrist is simply perfect.

What also helps to make Staged brilliant is how exceedingly well it captures the little moments of lockdown life, and how it incorporates its fourth-wall-breaking humour throughout the six episodes. Charming little touches are strewn throughout, like Simon not having the best internet connection, which mimics the aggravation of trying to talk through a delayed video call agonisingly well. Episode two sees Simon’s sister Lucy (Lucy Eaton) take over the call and meet Tennant and Sheen, the moment perfectly portraying the vibe of an awkward but sweet exchange between the two actors and a star-struck fan. Episode three features a surprising and utterly hilarious cameo from a Hollywood star who describes how his latest film has been plagued with production issues and an illicit director-star relationship, but that, officially, it’s been put on hold because of “the global pandemic”. Employed throughout is a great gag in which Sheen and Tennant argue over who gets top-billing on the play’s eventual poster, the results of their arguments then changing how they’re billed in the credits of the Staged episodes themselves. While having these brilliant little touches and funny asides, it manages to its weave its plot and subplots in nicely, each engaging and well performed by the leads and their partners, such as one that involves Georgia Tennant (playing herself) securing publication for her book, and another heartfelt story regarding Michael Sheen’s elderly neighbour. While the lives of these actors aren’t inherently similar to everyone’s experience during the pandemic, Staged is superb in how it makes their worries and interactions relatable to all.

Despite the unavoidable restrictions, the show is shot as well as it can be and the video call sequences are dynamically cut together. Credit must be given to the work of editor Dan Gage, who connects scenes with recordings of abandoned high streets and drone footage of empty towns to capture the distinctive quarantine landscape outside of the character’s isolation. Alex Baranowski’s music also nails the feeling of self-isolation perfectly, the score permeating the show with a sense of lazy indifference and boredom that echoes the leads’ lethargy. Evans keeps the concept together wonderfully as director, resulting in a show that achieves exactly what it wants to in how well it expresses the experience of lockdown for those in the performing arts, who have been left without an audience or a job. That, to me, is the core success of Staged. Other shows made outside of lockdown can be more exciting or more dramatic, with action and spectacle galore. But for a show made about lockdown, created during lockdown, I genuinely can’t imagine this being any better. Witty, charming, consistently funny, brilliantly acted and with a keen eye for the little details, Staged is a wonderful mini-series that will delight any viewer stuck inside and, one day, help us all look back with a laugh at the year when everything went topsy-turvy.