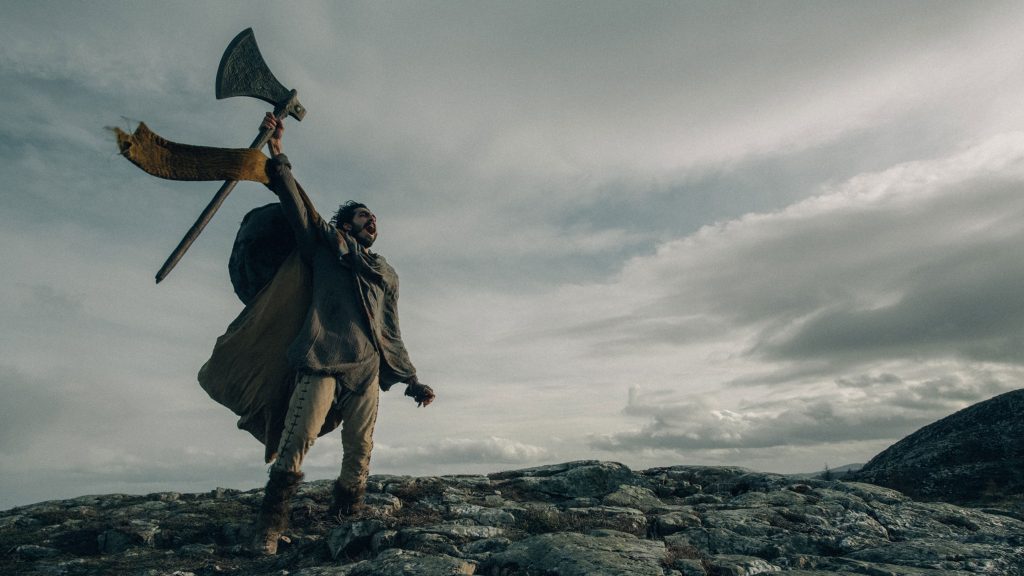 In a modern take on a small aspect of Arthurian legend (as in King Arthur), Dev Patel takes up the main role of Gawain, not the titular Green Knight, but the one who seeks him/it out. Heavily thematic and full of plush cinematography from the word go – is the film more style than substance?

The film itself states that it is an adaptation of ‘The Chivalric Romance’ by ‘Anonymous’, something that a bit of research immediately shows up as an entire genre – not the poem of ‘Sir Gawain and The Green Knight’ that serves as the primary source for the film.

The film begins with ominous speech, whispered and snarled over the sole image of Gawain atop a throne, his head crowned as the heroic, princely figure he seems to believe he is – and then suddenly wreathed in flame before we’re transported to a rural farm village, or at least a brothel within it.

As we move through the village, seemingly isolated from the world at large, with it’s own king (Arthur, Gawain’s uncle) and queen (Morgan Le Fay, of the legend), crowned in the same fashion as we see Gawain at the beginning passage.

It is here we start to see the themes of the film brought together, with no small amount of symbolism and almost theatrical presentation of ideals. If it feels heavy-handed when you watch the film, and watch it you should, you’re certainly not alone.

The Green Knight arrives, after an odd segment that lands us at the round table. Whether you view the knight, with his oaken skin, branches of holly as an invader of the court, a defender of nature – or something entirely different, it’s worth noticing aspects of the filming here. To truly appreciate the depth of the shadows, the emotions that cast across the actors’ faces, you’ll want to ensure you’re watching on a screen or projector to do it justice. A laptop or phone will wash out and lose detail that the film relies upon.

Gawain rises to meet the challenge from the knight, on the condition that whatever blow is landed on him will be repaid in a year at the green chapel. As his aging uncle Arthur passes him what we assume to be excalibur, deep red wine pours over the flagstones in some of the least subtle foreshadowing in this film. The eerie, unsettling soundtrack hangs over the moment between Gawain and the knight – but this doesn’t relieve the tension, which then hovers throughout the rest of the film.

Gawain’s year of wait is largely missed until his journey begins to the chapel (north, six days hence from the kingdom). This is largely where the emotional labour of the film begins. We see Gawain slowly progress from a petulant teenager, full of a need to prove himself, through to doubt and gradually shaped to a form of maturity by his experiences.

This peaks in what feels like a 25 minute fever dream towards the end of the film as Gawain appears to reach the end of his journey, although his resolution feels largely left up to the viewer.

The film lurches between scenes of verdant tranquility amidst forests with bandits, moonlit walks with mysterious lakeside figures and desolate misty mountains surrounded by a chorus of mournful giants (one of the most oddly affecting scenes in the film). All of this is undercut by a minimal but extremely powerful soundtrack where choirs are mirrored in different scenes, tied to objects or people. String movements are assigned to everything from combat to sex and the viewer may not consciously be aware of this, but if you pay attention, it will somehow sit uncomfortably in your mind, like a thorn from the knight.

This is not a film that can be casually watched, despite it being readily available on Prime Video for easy viewing on most smart TV’s. But if you can put aside an evening, ready yourself for the journey? The well done, brave knight.