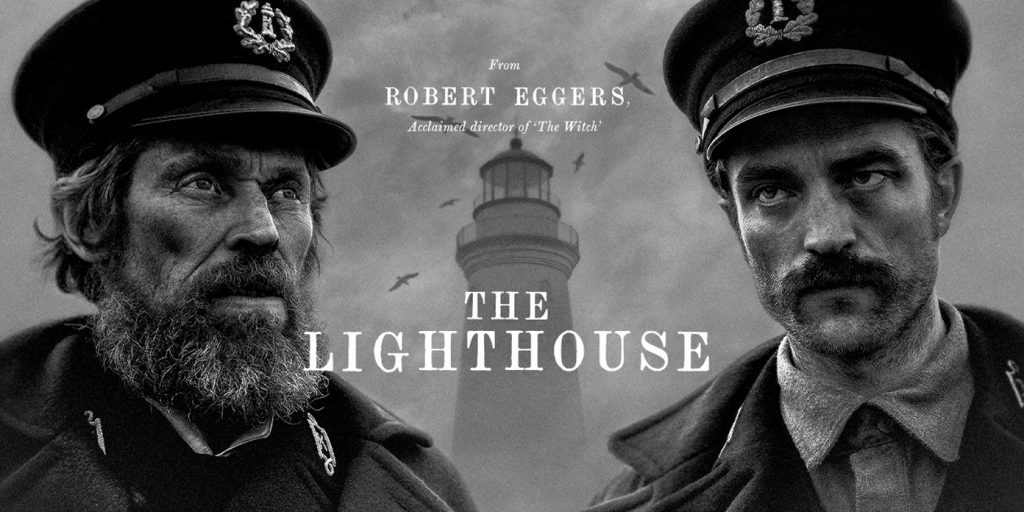 Two lighthouse keepers (Willem Dafoe and Robert Pattinson) arrive in thick fog to a desolate, isolated island but as the weather draws in they start to question not just each other’s pasts but their own sanity.

The story may seem straightforward to start with but there is a lot more going on here than initially meets the eye. This is a film that rewards multiple viewings and is littered with references to Greek myths and on second viewing you’ll certainly have more questions about the characters motivations that you did first time round, it’s a film that wants you to think and not take it on face value.

Willem Dafoe and Robert Pattinson are nothing short of superb here, the chemistry between the pair is indisputable. Dafoe’s scenery chewing performance is pure pantomime in places as he delivers a text book ‘grizzled sea dog’ that wouldn’t feel out of place in a Pirates of the Caribbean movie but it works remarkably well and when he unleashes (which he does a lot) you won’t be able to pull your eyes away from the screen.

Pattinson is at times more subtle but no less convincing as a man teetering on the edge of his sanity, he gets a chance to let go more in the later scenes and it proves to be one of his finest performances yet. If you still have doubts about this man’s talent then now is the time to let them go.

Eggers delivers one of the most atmospheric horror films of recent years through a combination of beautiful cinematography and jarring sound design. The lighthouse itself is lavishly framed and if the whole film wasn’t so disturbing the shots wouldn’t look out of place mounted on a living room wall. His superb shot composition isn’t just reserved for the lighthouse though, even mundane items such as ladders, wells and seagulls are so well shot that they add something to the already creepy atmosphere.

The near constant rumbling of the lighthouse horn and the squawking of gulls will further shatter your nerves and just as you start to feel comfortable the film will catch you off guard especially in a cinema with a sound system that packs a punch. The atmosphere crafted here is second to none and with only his second feature Eggers has already established himself as a leading director in the genre.

If you can handle the darker elements though you will be treated to one of the most distinctive, beautiful visions of the past few years, just be warned this is not a film for everyone and it makes no effort to be.