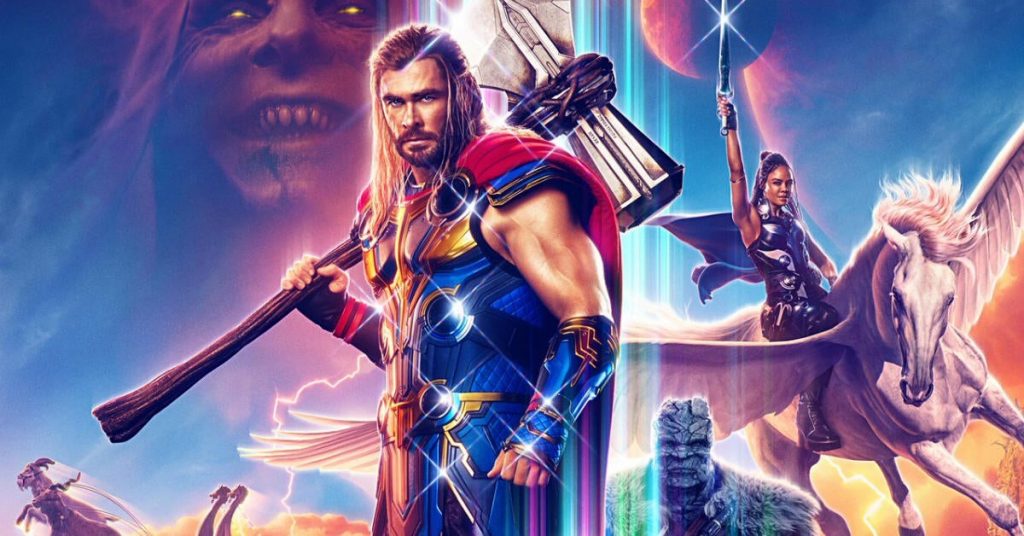 Played by the unmistakable Chris Hemsworth, Thor is one of the most cherished characters in the Marvel Cinematic Universe and a personal favourite of mine. It came as a big relief when the character was ‘reborn’ under the stewardship of Taika Waititi in Thor Ragnorok. Can this be sustained in his fourth (Thorth?) adventure as he is now the only one of the big three characters to go beyond three solo films.

Love and Thunder follows directly on from the ending of Endgame where Thor has joined the Guardians of the Galaxy for some ‘classic Thor adventures’. The film straight away shows us what made Ragnorok so enjoyable, we get some tongue in cheek humour alongside a killer 80’s soundtrack and thats all in the first 15 minutes. The main premise for this film is Thor wanting to give up his superhero days and focus on rebuilding Asgard alongside the comic relief of Korg (voiced by Taika) and the ever so dry humoured King Valkyrie, portrayed by Tessa Thompson.

His plans are way laid when Christian Bale makes his MCU debut playing Gorr the God Butcherer – bereaved by a loss and seeking revenge he sets out to make all Gods Extinct. His performance especially brought out a truly sinister side to his acting I have at least not witnessed before. This villain I believe is one of the best in recent MCU history mostly as you can see his story and sympathise with him, similar to that of Thanos.

One of the main twists is that Thor’s old flame Jane is back played by the returning Natalie Portman. Not only has she returned but she is now wielding Thor’s old hammer Mjölnir. Portman does a poignant job, almost as if she never left despite not having appeared in the MCU since Thor: The Dark World. We see so much depth to her character that this drives the film and really gives it its heart and soul, especially the reason she seeks out Asgard. Her introduction also leads into a rather unexpected, four-way relationship of Jane, Mjölnir, Thor and his axe Stormbreaker. This has a very prominent role in this film, which I found at least to be somewhat tiring after the first few gags. It does end up being key to the story but there is only so much yearning after a hammer that I feel is relevant.

We get fully immersed in some fantastical new worlds from the home of the gods to the shadow realm whereby the film goes noir. This is a stunning effect and reminds me of Sin City or Logan Noir. The realm of the gods also brings us into contact with Zeus played by none other than Russel Crowe who is doing – at least what I believe to be – a Greek accent, but as we know from Robin Hood his ability to do/hold onto an accent is a challenge. He does bring another bit of A list credibility and some fancy effects but doesn’t add as much as I thought it could have done.

The score is perhaps one of the highlights with some truly great songs joining in the action, such as Paradise City, Welcome to the Jungle and Sweet Child of Mine from the great Guns N’ Roses. This really compliments the scenes in which they appear. Carrying on the 80’s theme that Ragnorok kick started. We don’t just get killer theme songs but the overall punch of the film audibly also is an argument to see this film in the cinema, rather than at home on an iPad when the film inevitably comes to Disney+.

As a whole I really enjoyed this film, my only qualm were that some jokes are perhaps overused and that there isn’t the fresh feeling we got when seeing Ragnorok. This is to be expected but what we got instead is a mixture of humour, action and heart. The underlying themes of the film do help ground it in a way that Ragnorok didn’t. Another slight issue is not the fault of the film but of the ever increasing content that is ‘streaming’ out of Disney. The sheer amount of programmes and films that we need to watch is becoming fatiguing. I don’t see this ending anytime soon. This shouldn’t distract from some great individual films but it does make going to see them in the cinema that much more of an effort. Take this out of the equation and we are left with a solid film that is worth seeing on the big screen.