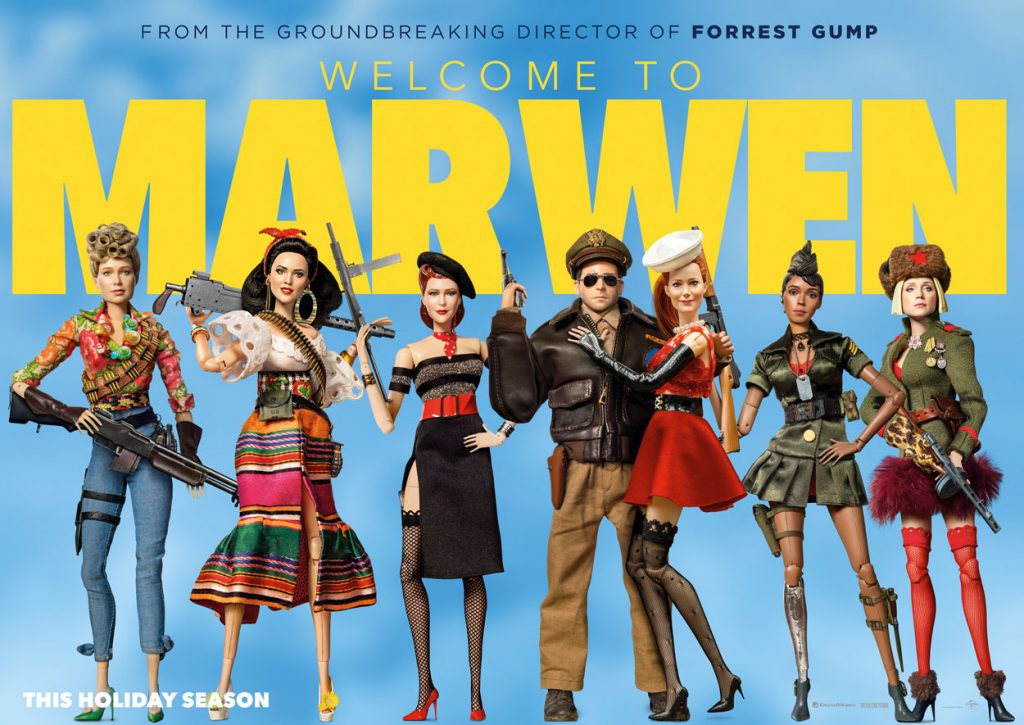 Based on the aftermath of a harrowing real life attack on artist Mark Hogencamp (Steve Carell), Welcome to Marwen tells the story of a man trying to piece his life back together through his photography by escaping into his fantasy WWII persona ‘Captain Hogie’, a confident soldier with women falling at his feet.

Cloying overwrought sentimentality is not a good look for a film, but unfortunately that is a look that Welcome to Marwen seems to wear with pride. Perhaps we should be entitled to expect better from Robert Zemeckis but he once again seems desperate to prove that his best years as director are behind him.

There are times in this film where the series of bad events that befall the main character start to feel like slapstick comedy, one stand out moment is when Mark gets shouted at by a nasty ex-husband, runs home, only to trip on his doorstep, fall over and have trapdoor land on his head. It is moments like this that take any credibility away from the film and will likely make you laugh when you should be crying.

Steve Carrell really doesn’t help either, his overacting leaves you more annoyed with his character than anything else. It really shouldn’t be difficult to feel pity for a man in this situation but somehow it is – you should just want to give the man a hug but in the hands of Steve Carrell’s mopey performance you just want to slap him out of it.

Nothing feels convincing here and despite a fantastic supporting cast – characters are either completely unrealistic (his neighbour Nicol) or completely underused, (any of the women of Marwen) and it’s nothing short of a crime against filmmaking to waste the talents of Janelle Monae and Gwendoline Christie in bit parts.  If you have this much talent in a film then it seems a staggering oversight not to make better of use it, the characters could have genuinely interesting but they just aren’t developed at all.

Its not all bad though, the film’s visuals are a delight and the escapist scenes, played out with dolls certainly give the film some sense of character, and I can only imagine the joy on the actor’s faces when they saw themselves brought to life in this way. Unfortunately though this only serves as a reminder of what a missed opportunity this film really is, in the right hands we could have something quite special, instead we get this soppy over-sentimental puff piece.