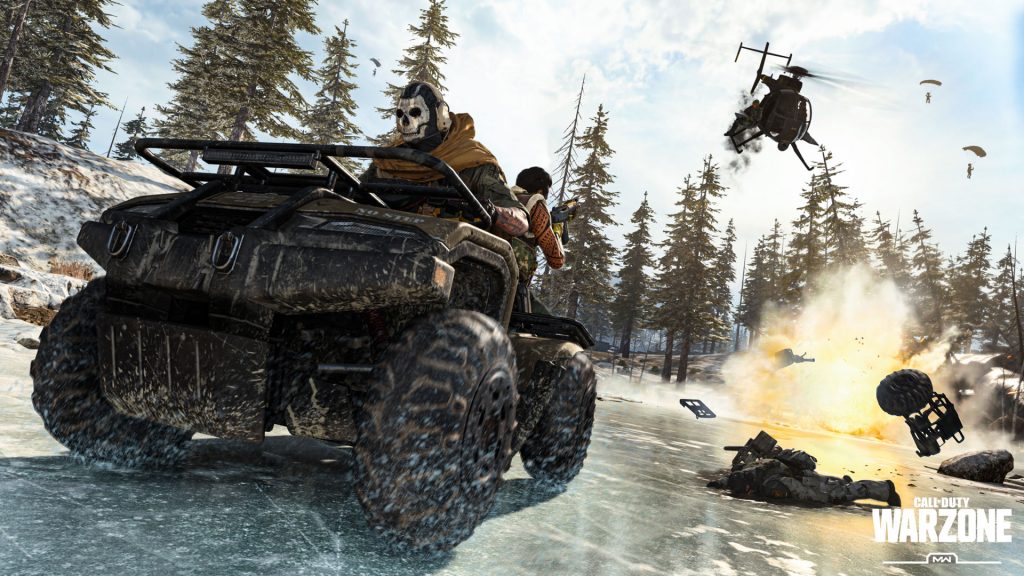 As I first descend into Warzone, parachute out, two teammates in tow, I’m lost inside the new Russian landscape and spoilt for locations to land while hoping to find useful treasures.

A few landmarks instantly catch the eye, definite hotspots for a sure fire team wipe and we choose a quiet farm reminiscent of early call of duty maps. Scouring the abandoned barns and garages with caution, we are anxious to meet our first match. All of a sudden bam, I’m down. This is generally how my experience of battle royale games pans out and after weeks of endless matches on the recent additions of the shipment and rust playlists, my clearly needed stealth and tactical skills have gone out of the window.

Like almost all other battle royale format games it is a free to download and play game, meaning its easy to team up with your friends. People who purchase the full game get the ability to create their own custom loadouts, which can be airdropped into the warzone for a small amount of cash. Cash can be found fecklessly laying around the place; inside chests, and by completing the newly introduced ‘contracts’ which are basically side missions you can do, useful for those early on quiet moments of the match. Cash earned can also be used to call in some classic call of duty killstreak rewards, a revolutionary addition to the battle royale genre which can instantly change the flow of the game.

My general experience of battle royale is spawn-die-restart a new match then repeat, with very little winning going on until I get disenchanted and quit from frustration. However with Warzone I have broken this cycle. Not purely because of the fact I have already played far too much of this game, but more down to the fact that once you die, it’s not over. In fact dying somewhat adds to the suspense. The game cleverly incorporates a couple of systems which give you (the player) a vested interest in how the game pans out – an incentive to continue playing and supporting your team mates after you’ve been killed. Upon death you are captured as a prisoner of war, and sent to ‘the gulag’ for a chance of redemption. Never before has being sent to the gulag been so potentially rewarding! Whilst there, you are entered into a one on one deathmatch which takes place against another loser. If you are the successor you are rewarded with a second chance to return to the battlefield to attempt to recoup your losses. If you are fortunate enough to be sent there whilst there is currently a one on one in progress you get to spectate from the gods, and can unwittingly throw the match by launching rocks at the two battling players below.

Further to the gulag, and adding even more the to team player aspect; if you really are so unfortunate that you die a second, third or even fourth time, your team mates can chose to buy you back into the match using their hard fought cash at a ‘buy station’.

Moving on to the world itself – what’s life like in Verdansk? My first impressions of the map were that it seemed a bit jilted. It felt very arcade-y and the layout of the place didn’t seem to sit quite right. But after many hours of learning my way around, it has grown on me. The mixture of built up cities and wide, open spaces leaves room for all types of preferred game play; whether it’s long range or close quarters that you prefer, you’ll soon find your favourite location to match this. There is a great verticality to the game, but not so much that you find many people camping in spots where you cant get to them. In fact for every high vantage point there is an equal low one so you find the game balances itself very well between these play styles, leaving no one with an unfair advantage. A special geographical shout I feel is in order to the Dam, allowing us to feel like prospective James Bonds as we parachute from the top with bullets flying all around us.

Warzone makes a great addition to an already great game and has reignited my interest in the franchise. The ups, downs and moments I’ve shared with friends on here have already made the game worth the (huge) download time. However the game is currently quite limited with options of play. Hopefully the new addition of solo play will spark another wave of interest. For this game to be free in itself is a huge win for the company and I’m sure it’ll bring many new and old players back to the franchise, re-instating it as the go-to, first person shooter. Go download it!