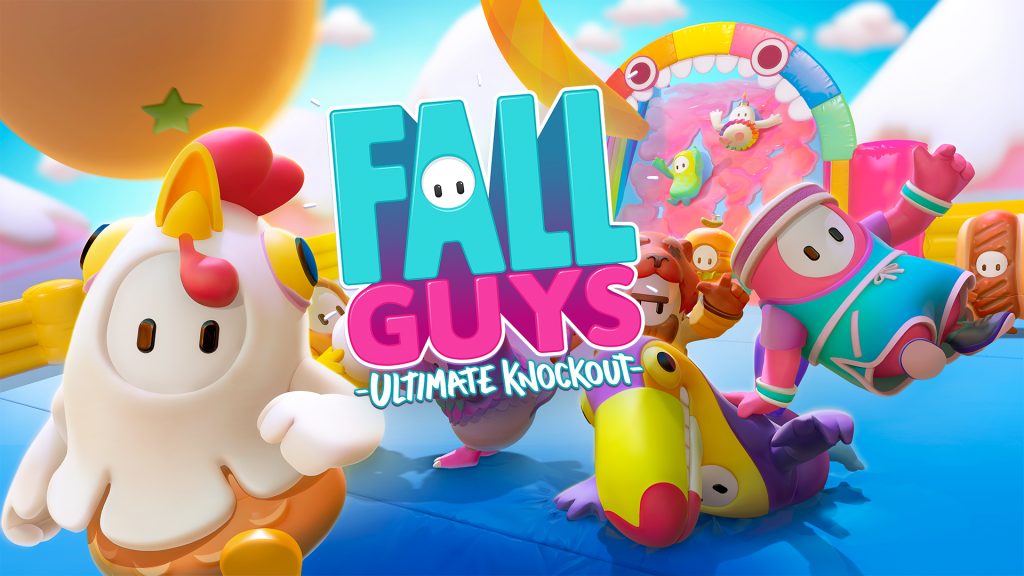 In Fall Guys: Ultimate Knockout, up to 60 players compete online through a variety of chaotic mini-games, where each round the losing players will be eliminated until only one victor remains.

Developed by Mediatonic and published by Devolver Digital, Fall Guys: Ultimate Knockout is well on its way to becoming the biggest viral gaming hit of 2020. The game has sold more than two million PC copies on Steam in just a week, and currently has an estimated eight million players on PlayStation 4. Fall Guys’ domination on PS4 is no doubt helped by being released free this month (August 2020) for those subscribed to PlayStation Plus (which is required to play the game online anyway). It is a shame, however, that Fall Guys is only available on PC and PS4 as I am sure Xbox One and Nintendo Switch players are eager to get in on the action. Thankfully, Mediatonic has stated that it is keen to release the game on these consoles at some point down the line. Even without releasing on every platform, however, Fall Guys was bound to achieve success thanks to its simple, addictive gameplay and clever concept. At its core, Fall Guys is a ‘battle royale’ game similar to the likes of other hit titles Fortnite and PlayerUnknown’s Battlegrounds. It’s a genre that took the gaming world by storm a few years back, wherein a large number of players compete against each other to survive and become the last player standing. In the time since, however, the genre has oversaturated itself slightly, being adapted by the likes of Activision via Call of Duty: Warzone and EA with Apex Legends. By no means are they bad games, but their familiarity has started to become all too apparent as, in each one, players descend into an arena, shoot, loot and survive.

This is where the genius of Fall Guys comes in. I have never particularly enjoyed battle royale games myself; I find there is too much time spent at the start of each round where you ultimately do very little, before coming across some genuine action that may or may not cut your game short. Fall Guys is different. From the moment a game is found, you and 59 other players are actively participating in the video game equivalent of a Saturday evening gameshow, a bit like Total Wipeout or Takeshi’s Castle. There are a total of 24 mini-games at the time of writing, with Mediatonic intending to add more as the game progresses. Each acts as its own obstacle course, which can vary from races across dangerous platforms, to a game of giant football, to a nutty version of tag rugby, where players are given a tail and must keep it from being snatched before a timer runs out. Three to five of these mini-games are picked at random and form rounds, the aim being to survive through each round and be crowned the ultimate champion. If you get eliminated, you can either continue to spectate or find another game. What makes Fall Guys an instant joy is that, unlike other battle royale games, you are in the thick of the action from the get-go in round one, and the simple controls and colourful graphics make it instantly accessible to anyone.

Your character can only be described as a jelly bean with a face, arms and legs – is a cute little creature that shouts ‘woo’ whenever you land a successful jump. The world it inhabits looks like a giant kids play area, padded and shiny with bright colours aplenty, and backed by a madcap soundtrack that really captures the frenzy of each game. Though this joyful stylistic simplicity is echoed by the simple controls (only three buttons are needed to jump, dive and grab), there are still tactics to be learned and practice to be had throughout Fall Guys’ mini-games. A see-saw bridge may seem like a simple obstacle until it becomes clear that, once it flips up, other players’ weight is needed to bring it back down. One mini-game features a tiled floor that has only one path to the finish line (a bit like that scene in Indiana Jones and the Last Crusade), while other tiles drop to an abyss. The only viable tactic is to be a bit cruel, and push other players into a tile and see if it stays standing. In reward for participating, players are given ‘Kudos’ points that can be spent on cosmetic customisation of your jelly-bean-person, from their colour, pattern, face and costume. These points can also be bought with real money via an in-game shop, but in my experience the game rewards you with enough to play without ever spending an extra penny.

Crashing into the battle royale genre at the perfect time, Fall Guys: Ultimate Knockout is an instant party treat that is a joy to play on your own or with friends, making for some addictive fun whether you win or lose. How it will retain interest after many of the same rounds is yet to be seen, but I am certain that, with continued support from Mediatonic, the game will shine as bright as its art style for years to come.