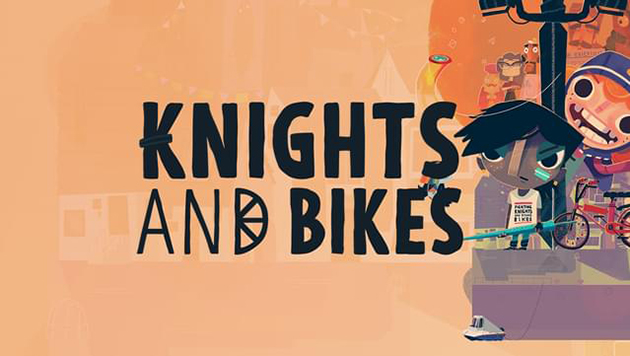 Get ready to relive some childhood wonderment with Knights and Bikes!

As much as I’d like to think that living in the South west of England for the last 9 years has had no affect on me, in truth it sadly isn’t the case. I get greeted by people with “Wasson”, confirm the quality of my work with “proper job” and refer to anywhere over the Tamar Bridge as “up North”. With all this South West blood now running through my veins, I also suffer from video game ‘Personal Location Bias’, a condition where any game that comes out with even a hint of having Plymouth or Cornwall in it is on my radar. Honestly though, the only time I can remember this happening is when Cap’N Jaspers was featured in an update to Burnout Paradise back in like, 2009!

Imagine my glee then when I happened across Knights and Bikes, a game created by Rex Crowle and Moo Yu, that not only sets itself in the Cornish coasts with the fictional setting of Pernfurzy Island, but also slaps a two player experience on top of it as well!

I was pretty excited; not just because it was set in the southwest, not just because it was two player, not even because there was a goose (well, I was pretty excited about that), but because from what I could see it looked to try and recapture the essence of being a kid and how magical everything seemed when viewed from four feet off the ground. To carry this sense of wonderment we’re introduced to our two main characters; Nessa and Demalza, as well as Captain Honkers the goose (of course), who spearhead this adventure on the search for the legendary treasure all whilst the cursed forces try to stop them. As story goes this is as much as I’ll say, because like with most things Knights and Bikes, the melancholy yet joyous tale is one that I would highly recommend you experience for yourself.

Or perhaps with a friend for that matter, as it’s one of the few new games that exists nowadays that allow you to play the whole story with a partner. This can be in the traditional sense of someone sitting next to you, or via the wonders of the internet by pairing up with someone online. Of course you can play this alone, swapping between the protagonists as you go along but if you want the full affect of the story I suggest playing it all with a friend or loved one by your side.

Now a game can’t be a game without gameplay and worry not because this one has it. In what I would call the Legend of Zelda approach to gaming it takes a top down perspective and allows you to explore the environment (on your bikes of course) whilst solving puzzles and fighting enemies along the way. To pull all these aspects of gameplay together you’re given multiple tools along the way. For fighting, you get a multitude of kid-friendly weapons in the form of Frisbees, water balloons and big old boots. More importantly though when you’re playing with someone else, you can link attacks together – I’m talking about slinging a frisbee and getting it kicked for extra damage. I’m talking using water balloons to create puddles that can be stamped in and, most excitingly, I’m talking about possessing an enemy and then walking them into the blasting boombox to see their sweet sweet dance moves. 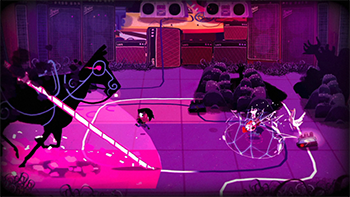 For the puzzle solving it’s nothing too insane, being mostly “go here/do that” utilising some of the items at your disposal to pull down panels or make machines work. It isn’t an overly complicated design but I’ll be honest and say there were a few times where me and my partner were left trying to figure out just what the puzzle needed, so there is a certain level of complexity in them.

Now it’s time for my favourite part of the game; the exploration.

Knights and Bikes very early on gives you a bike (not so early if you happen to be playing as Nessa!) and allows you to ride around to your heart’s content, or until you come to a blockage that requires an upgrade. Don’t worry though because you’ll get that upgrade as the game progresses allowing you to cover the entire map, but what you’ll also get is some of the coolest additions to any bike you’ll ever see. Many an hour has been spent so far trying to decide if the worm flag fits better with the chain or streamer handlebar accessories, and just exactly which is the most appropriate horn for such an adventure (p.s. – it’s always the Luxulyan Warrior).

Now I come to an issue, and it isn’t the fault of the game. The issue I have is that it’s so perfectly full of nostalgic Easter eggs and nods to both popular culture of the 80’s, and to physical locations of the region that I live in, that I need to cut myself off before I turn this into a thesis on every aspect of it.

With this in mind I’ll only talk about one more piece and that’s just how well the art fits in with the theme of the game, and just how impressive it is to see a game with this amount of detail put into the drawing of it. Unfortunately I have no ability to really explain why art is good and what makes it good but the style of Rex Crowle reminds me of a pop up book made out of every material you could find… and I’m into that. If anything though Knights and Bikes is a perfect example of allowing a distinct art style to take centre stage and just how positive that can be to the overall feel of it.

Actually there is one last thing that I would like to thank the creators for: the fact they got the layout of a scone right, and the fact they gave me the option early on to have a veggie option when eating a make believe meal. So far I’ve had more fun playing Knights and Bikes then any game I’ve played in recent memory, and although it may be short it hits so many beats that I can’t recommend it highly enough to anyone with an interested in unique art, Cornwall, or just trying to recapture the sense of adventure we all lose as we age.