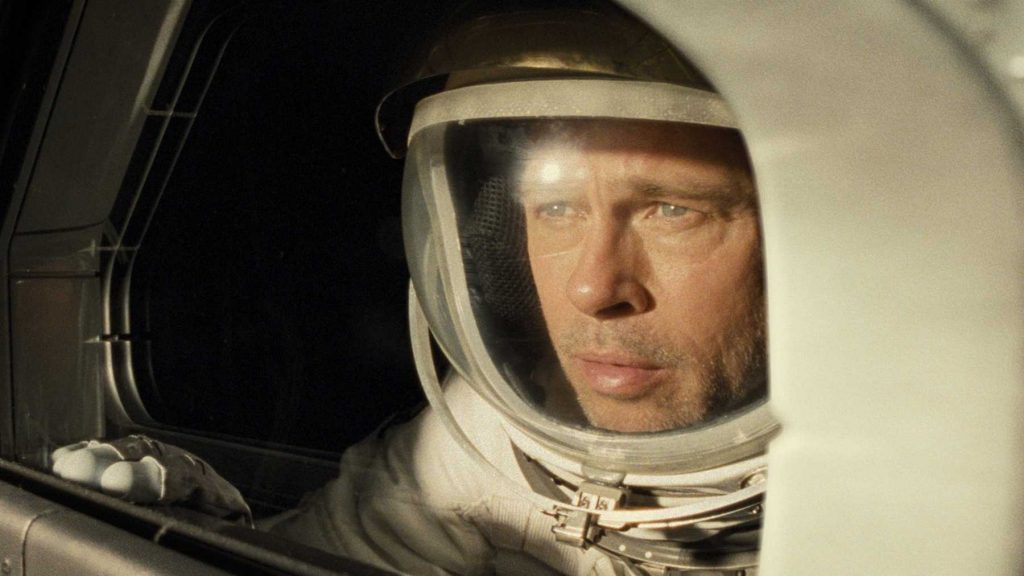 In the near future, stoic astronaut Roy McBride (Brad Pitt) survives a sudden explosion on a satellite, the result of a mysterious power surge emanating from Neptune. Tasked with venturing to Neptune, McBride learns that the source of the surge seems to be located around the last known location of his father, Clifford (Tommy Lee Jones), who disappeared thirty years prior.

In many ways, the most intriguing aspect of Ad Astra is revealed right near the film’s end, and exposing what it is would be a spoiler. The film represents the antithesis of what is usually examined in space exploration films – and that is the most in-depth statement I can give without revealing too much. No matter how much I wish to discuss, explore and, ultimately, commend the film on approaching this unique perspective, it is best left to discover yourself if you decide to watch Ad Astra. Should you? Well, that depends on what constitutes as a ‘good’ film in your eyes.

It cannot be understated: this is not the film the trailers show. What seemed to be a regular “husband goes on mission, wife fears for him” drag is instead something else: a slowly paced, contemplative and far less conventional film, particularly in its emotional engagement. If that sounds up your alley, I highly recommend watching it – even though I can only see some leaving the film genuinely fulfilled, whereas for others I see it being quite a numbing experience. I applaud Ad Astra for being a rare original movie in 2019 but, nonetheless, it still has some very clear inspirations – most notably of which being one of my favourites: Apocalypse Now. Yet, even that film had more levity. We get much of the same trappings: an emotionally distant, mentally struggling lead played by a world-class actor, a journey of both extensive distance and discovery, and even the same moody voice-over narration. I think the latter really highlights where Ad Astra falters in comparison to its 1979 muse, however. In Apocalypse Now, Martin Sheen’s narration weaves with the almost dream-like quality of the entire picture. I can’t quite put my finger on why, but the voice-over almost feels like a wonky post-production patch in Ad Astra, despite it being essential to fill in the very, very long atmospheric silences and gaps between conversations. What makes Ad Astra have less levity than Apocalypse Now is when these conversations actually happen. This is a sullen universe, filled with many unhappy people, with none of the snide humour and character-driven breaks in gloom that Apocalypse Now had to punctuate when the horror (the horror) actually happened.

In a way, this does help to build the atmosphere of the future that director James Gray is aiming for, and wouldn’t normally be an issue when it’s the protagonist who anchors us to this world. However, Pitt’s character Roy is intentionally written as emotionally absent, and while he does change over the course of the film, his near constant stoicism makes relating to him difficult. He rarely comments on the situations he encounters, the people he meets, or the vast sights he witnesses on his expedition. Perhaps this is a metaphor for the coldness of space; a character so in-tune with the void that he represents it. There are certainly reasons for his being so, and watching him eventually begin to change into someone more passionate is part of the film’s journey. Regardless, it unfortunately can’t mask the fact that for the majority of the story, we are bogged with a purposefully uncharismatic lead who mostly travels alone with no other characters to create an engaging spark. It’s for this reason that, on a fundamental ‘movie’ level, I can see many who watch Ad Astra being baffled at its critical acclaim.

However, if it is atmosphere, set-design, special effects, and both moral and philosophical examinations that make a movie shine for you, then perhaps Ad Astra will be quite the experience. It is absolutely stunning to look at. Every scene in space is crisply detailed and presented with appropriate depth and immensity, each spacecraft’s interior looking believably used and functional. A dune-buggy chase scene on the moon is tense and unpredictable, making full use of the setting and turning the heavy, close silence of space into auditory claustrophobia. The opening incident, in which Roy falls from an exploding satellite, is wrought with nausea and adrenaline, as though you are falling with him. From a cinematic standpoint, it hooked me into the film instantly. Finally seeing the rings of Neptune in the final act, cast against the ephemeral blue of the planet, made the entire journey feel like a great escapade to a striking vista, where the sight is a reward all in its own. This is going to make for a magnificent experience to push any home theatre system when it eventually arrives for home viewing.

As such, coming to a conclusion on Ad Astra is challenging. I can heartily recommend it, as I think it is entirely unpredictable whom might feel what in regards to its plot and ultimate thesis, and how it will appeal to different people in different ways. It is an objectively stunning cinematic experience tied to a subjectively taxing narrative one. It’s certainly clunky in spots, and in my opinion would have benefitted from a more varied characterisation, but don’t let that be a write-off. Borrowed from the Roman poet Virgil, the film’s translated title encourages you to “journey to the stars”. I suggest the same, provided your curiosity steers you there.