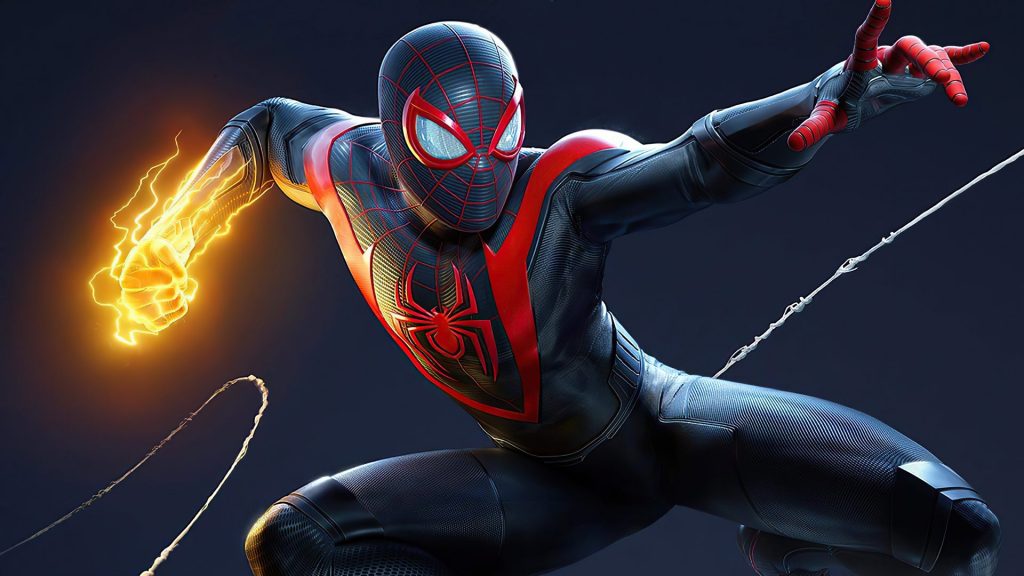 One year after the conclusion of Marvel’s Spider-Man, teen superhero Miles Morales takes on the responsibility of protecting New York City alone after his mentor Peter Parker leaves to travel abroad. Still struggling to take on the mantle of ‘Spider-Man’, Miles must also face a destructive and mysterious new super-villain known as The Tinkerer.

Quite like the young hero in its title, Marvel’s Spider-Man: Miles Morales bares a surprising amount of weight on its shoulders. As well as being a sequel to 2018’s stellar first game, Miles Morales also needs to prove itself as an experience that stands on its own and one that showcases the power and performance of the new PlayStation 5 console that it is launching with. It’s with great pleasure then that I can say Miles Morales springs past a few small faults to become a hugely enjoyable, beautifully designed and warmly written adventure game that sits in great company with its amazing predecessor.

Getting those faults out of the way first, it’s immediately apparent that Miles Morales is extremely similar in gameplay to the first game. Web-swinging, combat and mission design all remain largely the same, with a few tweaks here and there to spice things up a bit, but more on those later. If Marvel’s Spider-Man wasn’t to your tastes, Miles Morales won’t really do much to swing you over (sorry). Regardless, if like me you couldn’t get enough of the first game’s breezy yet exciting action-adventure gameplay loop, you’ll lap up the opportunity for more. Unfortunately, Miles Morales is much shorter than its predecessor, its main campaign clocking in at around 10 hours or so, with perhaps an extra 5-10 on top for side content. It’s by no means a deal-breaker, but considering it is charging the same full price for roughly half the gameplay time, it feels a bit cheeky on Sony’s part. Much of the narrative’s shortcomings stem from this truncated runtime: there are, without question, so many brilliant elements to Miles’ story here that aren’t given the room to breathe that they deserve. Characters, themes and storylines spring up with intrigue and bombast, only to be cut ever-so-slightly short by the game’s length. It’s a shame as Miles, the cast and this story clearly could have made for the same lengthy experience as game one.

Thankfully, developer Insomniac Games packs its quasi-sequel to the brim with a genuine heart, creating an experience made truly unique by emphasising the theme of community. Miles is a wonderfully realised hero, his grounding in Harlem made into a recurrent part of his character and the game’s world. Though the entire Manhattan map is open to players once again (now drenched with winter snow), never has a Spider-Man game before shone as brightly in the “friendly neighbourhood” side of the hero’s mantra. Many of the game’s main missions take place in Harlem and centre on its residents, with side-missions that see Miles helping small local businesses, improvement projects and homeless shelters. It’s all so endearingly personal, not only giving Miles himself a distinctive side to his heroics separate to his mentor, but also a local flavour unique to this game. It’s a genius stroke made by Insomniac, especially when Miles’ actions are rewarded by the neighbourhood’s residents as the game progresses. Street art, cheering crowds as you swing by, and even a special new costume that the residents make for Miles as a thank you, all contribute towards making Miles into the friendly neighbourhood Spider-Man we all love and that he aspires to be.

Those aforementioned gameplay tweaks are also very welcome, even if they are more evolution than revolution. Miles doesn’t have the number of gadgets and moves that Peter does in the first game, but he does come equipped with new powers such as bio-electricity that can charge extremely satisfying combat finishers, and a temporary invisibility that make him into a much more stealthy hero than before. By the time I was finished with Marvel’s Spider-Man, I had cracked the most efficient and effective ways to approach combat encounters – Miles Morales did the miraculous job of making me feel vulnerable again even though the basic elements of combat remain the same. At the start of the game I was, like Miles, unsure of how to best use his powers, getting used to his smaller skillset and getting frequently pulverised while doing so. By the end of the game though, I was mixing his powers, special moves and gadgets together with silky efficiency, further bonding my gameplay experience with Miles’ story.

Of course the game is also absolutely stunning to behold, on PS5 benefitting from 60 frames-per-second, 4K gameplay in ‘Performance Mode’, or the 30 frames, 4K ‘Fidelity Mode’ that fills the world with dynamic ray-tracing and enhanced visual effects. Even on PS4 (the console I played it on) the game still looks fantastic. Though it doesn’t have the bells and whistles of PS5’s hardware, it is still a top-of-the-line graphical masterpiece with gorgeous lighting, textures and a consistently smooth frame-rate. Even the last game’s exceptional photography mode gets new lighting features on both consoles, making user-created screenshots look more realistic than ever.

Though Miles Morales deserved a game as substantial as Peter Parker’s from 2018, and would have benefitted from a longer runtime and a touch more innovation, it’s hard to let those faults overshadow the many things it gets so very right. With exceedingly refined gameplay, stunning graphics and a distinctive, sincere atmosphere filled with heart and soul, Marvel’s Spider-Man: Miles Morales is a blast of bright warmth akin to the beams of sun that pierce through its wintery New York skyline. A terrific companion to the first game, I can’t wait to see where this winning Spider-duo goes next.