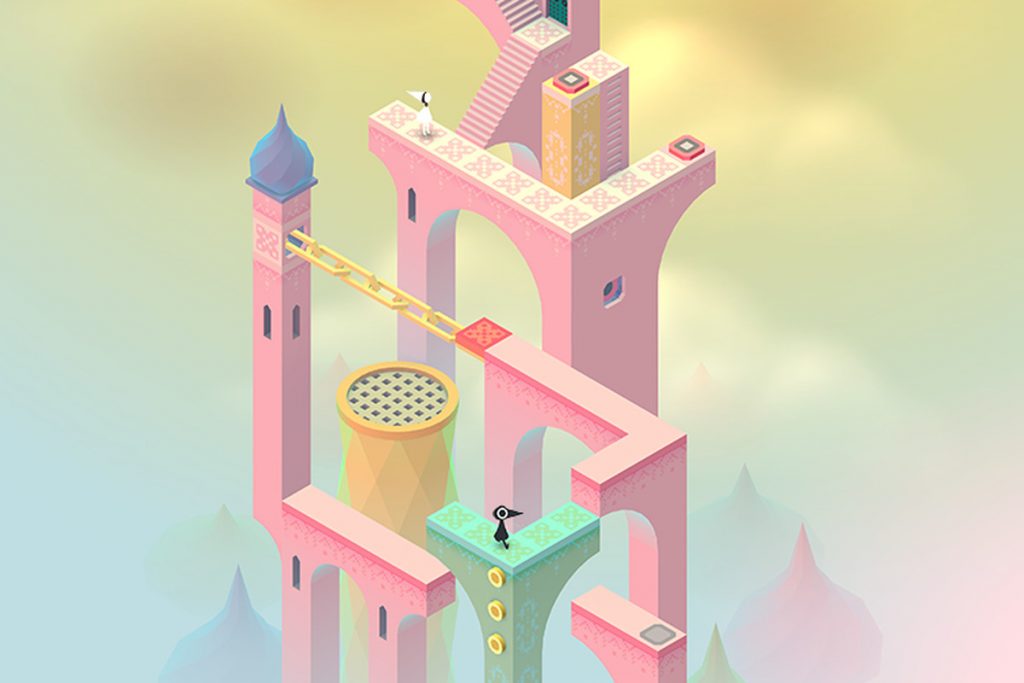 It’s always a wonderful feeling when a puzzle game strikes the perfect balance between intriguing game design and being, well, puzzling.

Monument Valley does this with ease. I’ve always found isometric games to be visually pleasing, but nothing ever really struck a chord with me in this genre. However this seemed to break my streak.

Right off the bat in the opening scene, you’re presented with a mechanism for creating a pathway to begin the game. This sets the stage for the rest of the game, as every level challenged me to change my perception of where Ida, the main character, can walk to. If you’ve ever seen the ‘impossible square’, the mechanics of this game have taken strong inspiration from this and are firmly rooted in this style. The puzzle game ‘Back To Bed’ would be the closest resemblance. Or even further back, Kula World on the PlayStation 1 (going back a few years, I know!) used similar perspective tricks.

Each level presents a new puzzle, progressing in slight difficulty every time. One thing I noticed was the addition of new game mechanics every two or three levels, which kept the game progression fresh and thankfully helped to avoid the pitfall of level repetition that some puzzle games fall into. I often find this can actually end up feeling like a chore and takes away from the enjoyment of a game.

As I progressed, there was one particular thing that struck me with each level. The colour scheme of the game. Simply put, it’s gorgeous. There’s rich pastel colours throughout, and it really creates an ethereal feeling. However, there are also a handful of contrasting levels going against this theme, with a gloomier feel of dark grey and black which is befitting of the storyline during these times.

Accompanied by the ethereal look is the music. There isn’t necessarily anything that jumps out, but the interaction with objects and how it affects the music is a very interesting element. Moving parts of the puzzle can sometimes play a selection of harp strings, echoing back creating a dreamy effect. All the elements seem to work harmoniously.

The storyline is presented in fragmented pieces to Ida, the character you guide through these puzzles. Now, I won’t spoil anything, but the more you progress, the more you learn. Which only made me want to solve the puzzles more!

I will say, the storyline is probably the only area where Monument Valley falls short. It does feel like the story is just an addition rather than the driving force of the game, but I’m really nit-picking at this point, as this isn’t the main attraction to this game. It’s the puzzles and the overall look of the game that attracts.

Overall, for a puzzle game that focuses heavily on mechanics and the isometric style, Monument Valley really captured my interest. Even if puzzle or isometric games aren’t something you would usually reach for, I can wholeheartedly recommend this. It really is a wonderfully crafted game, and it really feels like a rewarding experience with each puzzle you complete.