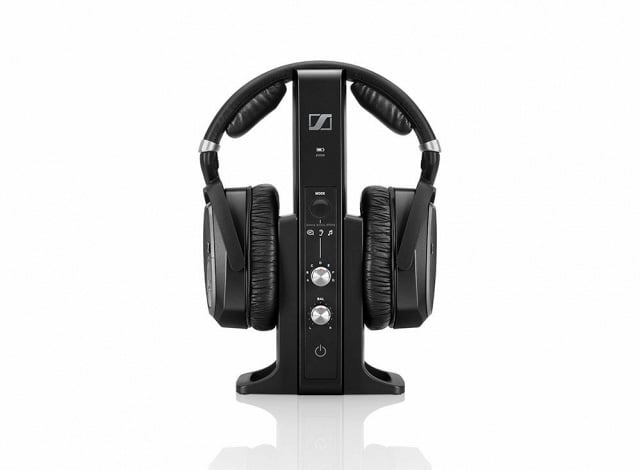 With our AV needs becoming more aligned with wireless capabilities, we find that customers are increasingly interested in taking advantage of this with headphones in the home. Naturally, with inbuilt Bluetooth as standard, portable devices such as smartphones and tablets act as transmitters when you’re on the go, but what about converting your home audio equipment to a wireless configuration? This is where Sennheiser’s RS range comes to the fore with models spanning from entry level to premium. An example of the latter is the Sennheiser RS195 transmitter and headphone pack which we’ll be getting to grips with in this article.

Sennheiser have always been a good name for audio, but they’re not just known for headphones. This year they released their first ever soundbar to excellent reviews (the Ambeo) and they have a fantastic reputation for their microphones whether in a recording studio or on the live scene. With such a reputation, we always get excited when testing out their products!

The RS195 has connections for a digital optical feed or an analogue 3.5mm jack so whatever your system has you can connect up easily. The transmitter acts as the charging station for the headphones themselves and also features a button to toggle between sound modes and dials for tweaking the balance and sound profile (more on that later). The headphones come with removable cups so that single AAA rechargeable batteries can sit in each piece. On the outer side of the right hand cup sits controls for power, volume and the sound modes.

The first thing that you notice when placing them on your head is that you won’t be left wanting when it comes to comfort. The squishy padding on the headband and the cups is a perfect balance between being snug enough to block out sound but light enough not to squeeze your bonce too much. In the end we happily had them on for lengthy periods at a time without complaint, even losing track of time a little whilst we were immersed in music. 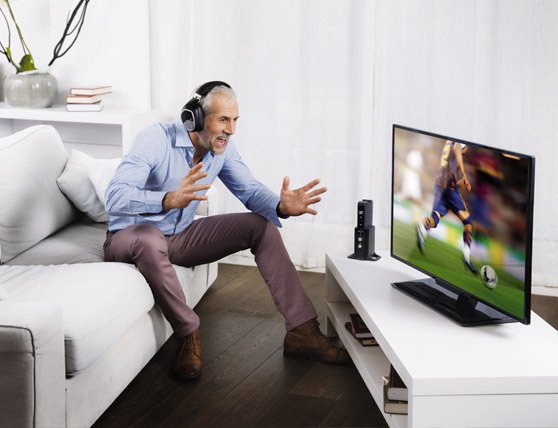 Enjoy the full Sennheiser sound, without the wires, with the impressive RS195 wireless headphones.

Being given the option of a digital connection means that you don’t need to use your amplifier and can take a feed directly out of your source, such as the Audiolab 6000CDT CD Transport we used. The pure signal means that you’re less likely to experience audio dropout when you move away from the transmitter and you get a cleaner sound too.

Sofi Tukker and her track “Purple Hat” is what we kick things off with and the creative merging of funky guitar and electronic loops is a punchy treat to the ears. The solid and deep bass is particularly impressive but there’s enough snap to the high frequencies to give attack to hand claps and such. It’s a great track for testing out the drive and rhythmic precision of equipment and the RS195 shows it’s up to the challenge.

Switching down a gear or two, next on the playlist is “Sideways” by the soulful Jo Harman. The acoustic guitar and single vocal line is wonderfully uncrowded and allows the Sennheisers to make the most of the ambient sound of the recording. The guitar is rich with tone and full-bodied enough to carry the tune on its own but it’s Jo’s voice that steals the show, especially in the latter half of the track where the dynamics ramp up a bit.

Unsurprisingly, the “Music” mode is great for these tracks and strikes a good balance between being detailed and full sounding without going overboard, you will get a little compression though so some might enjoy the pure unchanged signal instead. We tried experimenting with the “Sound Profiles” ranging from A to G but in the end the middle way of option D seemed to meet the best compromise between pronounced treble & rolled off bass and vice versa.

Some visual content was the next thing on the agenda so a 4K Netflix stream of The Witcher via our Samsung QE75Q90R TV in our demo room was soon set up and running. The end scene of Geralt swiftly taking down a crew of mercenaries in a village market is full of clashing swords and swift justice but all the time maintaining clarity of dialogue and dynamics. It’s difficult to test the “Voice” mode when you’re not hard of hearing, but the Sennheisers did a sterling job of squashing down low and high frequencies to make the midrange and dialogue clearer.

Once we tore ourselves away from the screen we tested out the range of these RS195s and whilst they couldn’t penetrate to the darkest corners of our stockroom on the opposite side of the building, they did manage to provide ample coverage all over the shop floor adjacent to the Demo Room. One hundred metres is the quoted range for the transmission in free space but this will be much reduced inside the home. You can thankfully pair up to four separate headphones to the transmitter though so no need to worry if more than one person is watching or listening too.

Tripping over cables and limiting your movement isn’t fun but switching to a wireless solution usually means compromising somewhere. Thankfully the pros far outweigh the cons in this case so make sure you check out the Sennheiser RS195 if you want a wireless solution to a cabled set up. Give your local Richer Sounds store a call to arrange a demo.

Sony have been in the portable music game for longer than any company in existence. They started back in 1979 with the original Sony Walkman…read more →

Everyone who exists as of right now knows who Apple are. Now we've established that fact let's talk about Airpods Pro which will undoubtedly be…read more →

Dolby Atmos and DTS-X may not be the fresh new things in town that they once were, but when it comes to immersive cinema sound…read more →