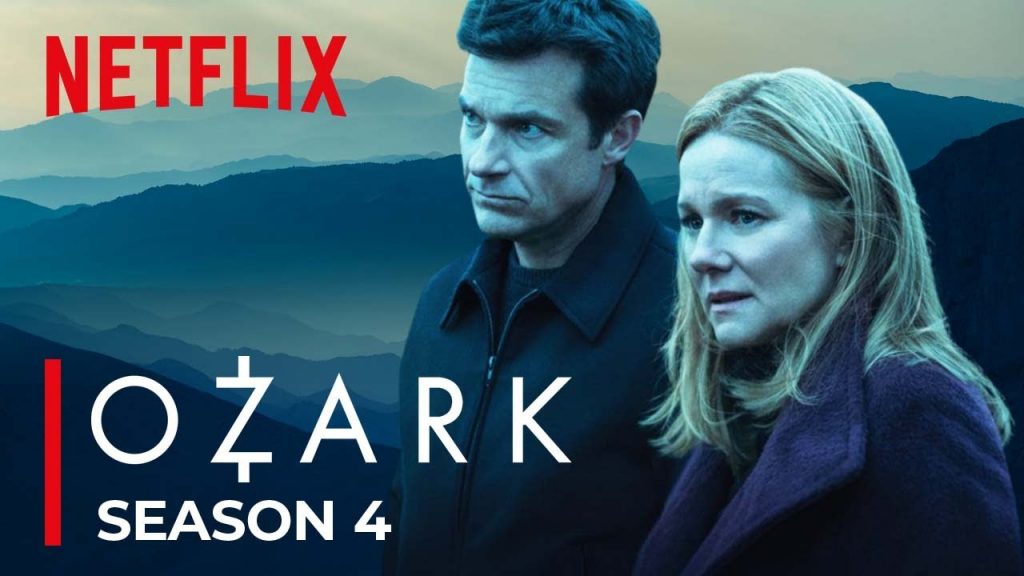 Having been in league with opium growing hillfolk, a Mexican cartel and managed to swerve and con their way through the local business and political scene in the Ozarks. Marty and Wendy Byrde are back in their new home, by way of where we left them (in Mexico) at the end of the third season.

(Mild spoilers for the first three seasons ahead)

Often compared to Breaking Bad, Ozark is similarly a slow burn thriller/drama filled with characters linked to various echelons of a drug-fuelled underworld. However, this is where the similarities end. Marty Byrde (Jason Bateman), is not a man at the end of his life, trying to desperately put together enough money for his family before the clock runs out. He is a talented and largely amoral accountant, who through clever flashbacks we find has been drawn into the employ of the cartel.

His wife, Wendy (Laura Linney) has been unfaithful to him, vividly shown in the first episode of season one – shortly around the time we see Marty beg and weasel for his life as his colleagues are summarily executed. His begging allows him to bring his wife and two children Charlotte (Sofia Hublitz) and Jonah (Skylar Gaertner) from Chicago to the ‘sticks’ of the Ozarks, where he must launder $500 million in 5 years – or die like the rest.

The show pulls no punches from the off… and from where it left us in season 3, with cartel boss Omar Navarro (Felix Solis) murdering his lawyer where she stands next to Marty and Wendy, leaving them to clean parts of her out of their hair as we rejoin them now. Having been delayed like so many things due to COVID, the show is quick to refresh us and with a fairly minimal cast that slowly rotates as players are removed as in a Greek tragedy; it’s not hard to re-familiarise yourself with where you left it.

Following the party they flew out to attend at Omar’s (punctuated by the aforementioned murder), the cartel boss immediately lays out the scene for the audience. He dreams of ‘going straight’ like the Byrdes public display of their ‘foundation’, but when Wendy tells him he can’t have what he wants, he openly muses why he left them alive. This gives the Byrdes, and the audience the ultimatum – help Omar get free of his gilded cage, or die like the lawyer.

Whilst all of Ozark’s cast play their part eerily well, from Bateman’s cold, unflinching financier – who shows little to no real emotion across his face regardless of the horror; to Linney’s homely smiling face, ever present except for brief moments. Such as the everyday task of killing your own brother, it’s no understatement to say that the women in Ozark are truly driving the story.

Ruth Langmore (Julia Garner) somehow manages to find herself as the moral anchor of the show, despite her own criminal doings. However it is her wily nature and newly severed relationship with the Byrdes that helps to drive season 4 forwards. It is Wendy’s separate schemes to Marty’s that send the plot spinning off into the long grass and likewise her calculations that bring them back from the brink.

There is also the ‘hillbilly’ matriarch and heroin supplier Darlene Snell. Her constant chaos and fury acts like a tornado tearing through the plans and machinations of the rest of the cast… even previous allies. Charlotte, the wayward daughter of the Byrde’s also has similar dreams to the rest. With all the cast seeking to get out from under one another and all their crimes. Charlotte wishes to leave her parents, the Ozarks and the cartel all behind, so long as she can keep her brother safe.

Visually, this is a good show to finally consider that TV upgrade. To take full advantage of the murky colours, the shadows and the tension that the show can produce, you’ll need something capable of HDR and the better the contrast, the more it will draw you in. To me, it screams OLED, so feel free to check out our reviews for those before you throw yourself into the show, you won’t regret it.

Season 4 has been split into two parts, with part 2 due later this year. This doesn’t mean that you’ll be left simply twiddling your thumbs for the next however many months. The show will leave you screaming for answers and Googling fan theories and thoughts until you’re finally given the answers.