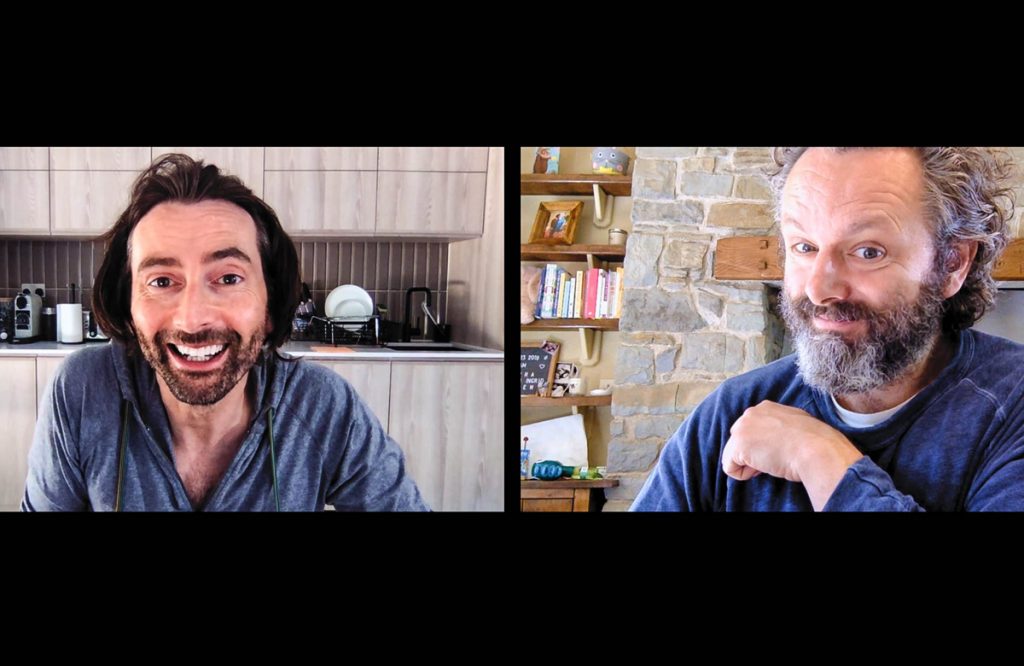 A Welshman, a Scotsman, and a whole load of pent-up actor energy log into a Zoom call. The Scotsman says to the Welshman, ‘The Welsh must have a good phrase for the end of the world. You know, Dylan Thomas must’ve written a poem or something.’ The Welshman replies, ‘Of course, he wrote, do not go gentle into that good night.’ Given the context in which Staged was filmed and most likely viewed, this opening has the capacity to traumatise and inspire in equal measures. Thankfully, it manages the latter.

What follows is a lively, brilliantly crafted journey that follows actors Michael Sheen (who plays himself) and David Tennant (who also plays himself) through their attempts to rehearse a theatre show over Zoom in lockdown. The exasperated looks of their increasingly frazzled director, Simon Evans, perfectly encapsulate the experience of home working that many of us can relate to in the current moment.

It’s oddly comforting to see our own experiences align with those of big-name actors like Tennant and Sheen – although the distinct lack of WiFi issues is a dubious discrepancy. The writing by Evans, who wrote and directed the show as well as playing himself, captures the unending monotony of back-to-back video calls once everyone has run out of things to say, together with the bizarreness of living through a global pandemic. This considered, if sitting at home all day in your pants eating everything in the cupboards isn’t the worst thing to have happened to you throughout lockdown, some of the more sobering moments may hit closer than is comfortable to home.

Set entirely inside the characters’ homes, the scenes that occur beyond the virtual realm of Zoom offer glimpses of the familiar struggles going on behind many closed doors. Sheen and Anna, his partner, are drinking more than usual. Evans’ avoidance of the steadily growing number of missed calls from his boss, funnily enough, doesn’t make his stress go away. And Tennant’s dodging of home-schooling duties is a continual source of frustration for his wife Georgia. All this, interspersed with more specialist gags for the theatre nerds among us, and the occasional Welsh language lesson, makes for a relatable and laugh-out-loud (sometimes so you don’t cry) viewing experience.

Buried among the endless actorly bickering is a deeper tale of something being clung to through the desperation of unprecedented times. While occasionally the scenes or story seem – for want of a better word – staged, in the subtext of the many drawn-out silences, and in the very fact a show set on Zoom exists at all, is a sense that we are witnessing the grappling survival of something important. Whether you’re an actor disconnected from your capacity to create, or experiencing this loss in other ways, Staged shows that togetherness, whether virtual or not, is a vital part of keeping what you love and who you are alive.