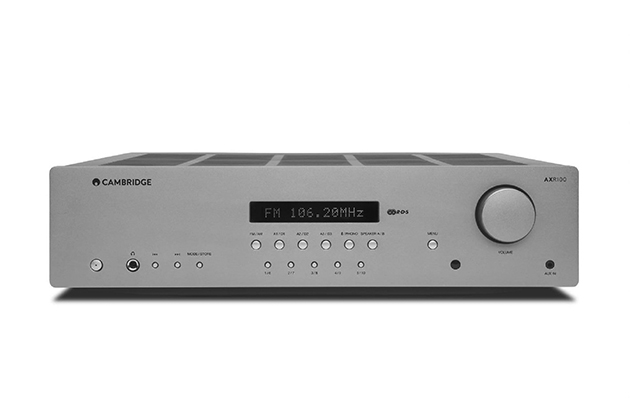 You may have already seen Cambridge Audio’s new AX range of hi-fi separates in audio-related media of late; their AXA35 integrated amplifier received a 5-star award from What Hi-Fi? and we recently tested out the more affordable AXR85 here in Bristol for the Tech Blog. Now it’s the turn of its bigger sibling, the AXR100, to see if it can wow us in the same way.

The two units look near identical to the casual eye with the same screen and buttons on the front panel, but the AXR100 is packing some extra features that may just tip the balance in its favour when you’re choosing your next amplifier. For a start, as the name suggests this unit has 100 watts per channel of power at its fingertips and like the AXR85, this can be used to power 2 pairs of speakers. The 4 analogue RCA inputs (including moving magnet phono stage), 3.5mm Aux jack input, Bluetooth and FM/AM tuner also carry over but are now joined by 2 optical and 1 coaxial digital inputs. 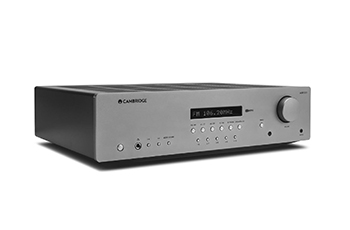 We decided to hook up a pair of Monitor Audio Silver 200 floorstanding speakers and a Sonos Connect streamer via coaxial to delve into our CD-quality Tidal account. First up is the 2014 debut album ZABA from Glass Animals and the track “Pools” is our tune of choice. Much like the AXR85, the AXR100 immediately shows it power with the focussed low end and the rhythmic and syncopated worldly percussion. When pushed a bit further however this amplifier loves to stretch its legs and dish out a weighty and driving character which is a great starting point for the Silver 200s to work with as their attacking nature makes the most of the energy the AXR100 has at its disposal. There are plenty of layers in the production of this track and it’s great to hear the AXR100 handle them with aplomb.

We like our subtlety too though so we switch over to virtuoso guitarist Jon Gomm and the tune “Passionflower”. His mix of fret work and percussion on the body of the guitar blend the rich, warm tones of the strings with the articulate attack of his techniques. The Cambridge does well to take it all in its stride and give out a nicely balanced soundstage that picks up the little intonations that he adds in whilst demonstrating great sense of scale when the dynamics swell up. 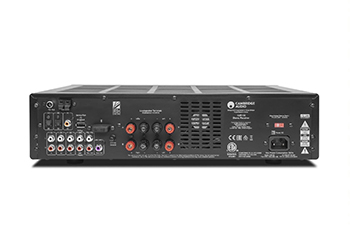 All this power under the hood of the AXR100 makes us eager to get back to something more exciting though so, with their first new album in 13 years due out soon, a bit of progressive metal from Tool seems in order. Classic track “Stinkfist” is our choice of track due to its epic and huge sound, perfect for showing off the power of the Cambridge. Once the intro changes to the massive opening riff the thickness of the sound is very impressive. Like its less powerful sibling, the AXR100 has a rounded top end that doesn’t come across harshly but still manages to add some sprightliness to the guitars and drums whilst the midrange gives things plenty of body. Don’t be afraid to turn it up either as the AXR100 just keeps giving when it comes to power.

For those with larger rooms to fill, this amplifier is definitely something to consider when looking for something to drive speakers with ease. The expansive feature count of analogue and digital inputs as well as a wireless streaming option adds cream on top to an already tasty proposition. As ever though, hearing things for yourself is the only way to be certain so make sure you contact your local Richer Sounds to arrange a demo.

Click here to learn more about the Cambridge Audio AVRX100